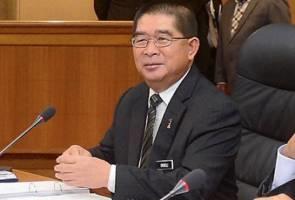 He said a series of meetings were held between the ministry and Selangor government officials to discuss and resolve matters before the hand-over.

He said matters relating to the schedule of handing over water management in Selangor and the Federal Territories of Kuala Lumpur and Putrajaya to the Selangor government through Air Selangor were also discussed at the joint meeting with ministry officials, Tuesday morning.

"In our view, with the cooperation given by the respective parties, we should be able to complete the transfer as scheduled," he told a press conference during the ministry's Hari Raya celebration held at the Malaysia Agro Exposition Park Serdang (MAEPS).

He was commenting on developments on the Water Supply Restructuring Agreement between the federal government and Selangor government following the signing of the Supplementary Agreement to the Master Agreement on July 10.

The signing of the Supplementary Agreement involving the federal government, Selangor government, Pengurusan Aset Air Berhad (PAAB) and Air Selangor saw the parties to the agreement given 60 days to fulfil the Condition Precedents (CPs) to the Master Agreement.

Ongkili said the authorities were still required to sign several documents, including the facility agreement as a PAAB requirement to issue an allocation of RM1.65 billion to allow Air Selangor to take over the water concessionaires including Syarikat Bekalan Air Selangor (Syabas).

He said another matter to be resolved was the question of issuing an operating licence by the National Water Services Commission (SPAN) to the new operator, that was, whether to continue with the existing licence or to make a replacement.

Ongkili also said that the state government had not informed the ministry on the Selangor Economic Action Council's decision on approving several applications by the ministry in ensuring that the Langat 2 water treatment plant and its distribution system (LRAL2) project would run smoothly.
Press reports had quoted Menteri Besar Mohamad Azmin Ali as saying that among the approvals decided on July 30, was permission for the project planning and implementation of project works at the sites involved.

According to Azmin, the approvals involved applications from the Land Office, Kajang Municipal Council (MPKj) and the State Forestry Department.